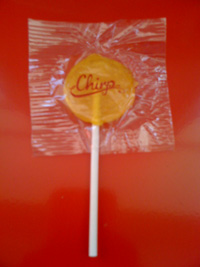 I flew out from NYC with other members from the Hunch team to the twitter chirp conference this week in San Francisco. Here are some of my thoughts in no particular order, topics are code writers, let’s talk business, @anywhere, filling holes, misc.

Will.i.am from the Black Eyed Peas was hanging out at the conference (often chilling with Ron Conway). I’d normally describe my profession as being a “developer” or a “software engineer,” but funny enough he used the term “code writers”—saying that they will be closely involved with bands in the future (as the medium for delivery of music continues to change). This term immediately sounded silly to me, but it started to grow on me. “Code monkey” is a derogatory term, but “code writer” seems to align more with the idea of an artist or a novelist. Maybe if I find myself at some hip party in Williamsburg and someone asks me what I do, I’ll respond in an open ended and mysterious way that I am a ”code writer” or maybe even a “writer of code.”

Liz Gannes wrote a good overview of the chirp conference, and hit the nail of the head when she wrote:

“That Twitter has been out of touch was obvious on the first day of Chirp, which was billed as a developer conference but content-wise was all about business and media.”

I found it interesting to learn some more about the business of Twitter, to see their new “resonance” model, etc.—it will be really exciting to see what develops with and around twitter in the coming years—but the conference was missing a focus on developers and hacking. The actual hack day was a bit clumsy:

I was excited to see quick presentations of ”hacks” ranging from useful to down-right silly (like the cosby sweater app at the yahoo open hack day in nyc–desperately looking for a link), but the final seven presentations at chirp were mostly polished products that teams had been working on for well long before the hack day.

Wikipedia describes a hack as:

“a quick, elaborate and/or bodged solution students devised for a technical obstacle; it was used with hacker, meaning one who discovers and implements a hack.”

To riff off Robin Sloan’s ignite presentation at chirp on Stock and Flow hacks are generally fleeting, quickly built showcases of technical skills that fall into the category of flow—not stock.

The @anywhere stuff is real cool. At a basic level, it’s the easiest way for any site to integrate twitter functionality using purely client side javascript, with stuff like oauth, hovercards, follow buttons, timelines, and tweet boxes. 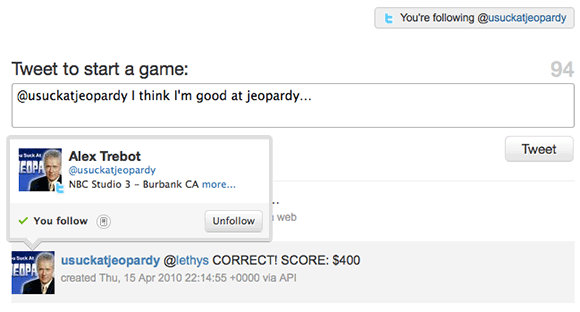 The team pulled together a version of it for the hack day that allows you to do pretty much any of the normal api calls with nothing but javascript. I used it to quickly hack together a page for the @usuckatjeopardy app that I built with Ben (using a little bit of Twitter, Jeopardy, and Hunch—disclaimer: the twitter bot for it may be down). The client side api was a little buggy here and there, but it has some promise by allowing developers to spend less time setting up oauth and more time building interesting and easy-to-deploy apps.

Filling Holes (and getting paid)

Twitter has been growing so fast that the actual product has tons of holes in it. They have a huge developer community—at least 75% of tweeting and consumption happens on 3rd party apps—and many of these apps were filling holes in Twitter’s product. Turns out Twitter wants to start filling these holes themselves, and this really juiced up the tension between the two groups.

1 billion users is their new goal, and in order to get there, they want to ”reduce friction” for users so it’s as easy as possible to join and use twitter. Hence, their move to have their own free, branded mobile apps for iphone, blackberry, and upcoming on android.

As a user of twitter, I have always been disappointed in all the holes in their product and the barrier to entry of learning all the quirky things about it (even as a developer I was astonished that there is no direct way in the api to query a conversation between two users). From that point of view, this absolutely makes sense, but really scares and alienates a lot of Twitter developers who are suddenly competing directly with Twitter.

However, I’m really interested in seeing how the new model of promoted tweets will pan out. It shares 50% of revenue (after base costs) with 3rd party apps. If it does actually work out, then a lot of apps that currently cost money may be released for free and be able to compete a little better with the twitter branded apps. Funny enough, if you operate somewhere outside of filling holes or replicating twitter, e.g. analytics, social gaming, etc., it’s not clear to me that these types of apps will actually benefit from promoted tweets…

Overall, I had a good time, the weather in San Francisco was great, I learned a bunch about Twitter, and met lots of people—most were pretty friendly and the Twitter management was very approachable. The venues were cool, apart from the internet connectivity. Awesome job by @biz (ripping on @ev) and @anildash doing Powerpoint Karaoke, and great job Matt with your ignite presentation on Hunch and the Twitter social graph! By the way, I got the lollypop from the afterparty, which had a very dangerous open bar from 8PM–midnight…

Great writeup (I pretty much had the same experience as you -- oh and I got to briefly meet you while you were playing with your Jeopardy app -- I was the chubby guy that mentioned he was also from NY)...anyway just one quick typo I noticed...it was @biz and @anildash doing the powerpoint karaoke (but Biz spent his time talking about Ev and Ev's marriage -- which was hilarious). ;-)

Again - awesome job as always...oh and hope to catch up with you on this coast sometime!

Hey Kevin, thanks for the correction (fixed)! I’ll give friendstat.us a run, anything that deals with tweet overload sounds good to me. Ben and I are gonna try to setup @usuckatjeopardy to run more permanently. We should meet up at some point in nyc, I’ll keep you posted on some upcoming stuff.

Btw, I missed the full presentation on annotations. Care to elaborate on this tweet: “oh btw, Twitter annotations is going to be HUGE for gaming...will finally start to see some interesting games on twitter!”

Hey Bjoern, it’s true, not all presentations were long-going projects, great work to those who did their full hack overnight! I just kind of wanted to see the full range of what people built, see some goofy stuff, and see some people do a really bad job or a really good job of showing it off—it’s a fun way to end a hack session :) Also, good luck with the move to NYC!