This post is for people who own an “old school” iPhone 3G and want it to be fast again.
Feel free to skip the intro. 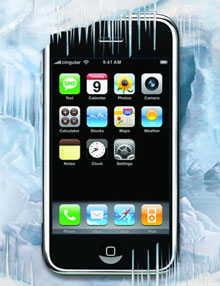 Remember when you first got your iPhone 3G? Remember how state-of-the-art it was? Remember loading maps and walking through the West Village (or any other wacky neighborhood) navigating it like a genius? Remember being able to take a whole series of photos at the speed of a paparazzi? Do you remember?

If you want to taste that sweet nectar of a new iPhone once more without having to actually buy a new iPhone, then I have the solution for you…

It turns out that the newer operating system makes the iPhone 3G utterly unusable, but it’s easy to fix this problem. Here’s a full tutorial from iphonehacks.com on how to do the downgrade. It boils down to:

After that you should have all your contacts and most of your apps back, but not photos, old texts, starred phone numbers—you should download your photos ahead of time with iPhoto, ImageCapture, or whatever. More importantly you’ll have a phone that is quick again. It’s probably the best thing you could do with an iPhone 3G.

Get out of Jail Free: now that you’re running iOS 3.1.3, if you want to jailbreak your phone, you can easily do that by going to jailbreakme.com on your iphone and using their one-click jailbreak. Unfortunately unlocking your phone is a lot harder and maybe requires changing the OS again? (Basically the latest modem firmware 05.15.04 was a no-go when this post was written, and the only exploit requires upgrading it to an ipad 06.15.00)

Just to reiterate… downgrade your iPhone 3G iOS 4.2.1 to iOS 3.1.3 it will positively affect your life. Buy a new phone when you’re ready, if you’ve waited this long, wait for the iPhone 5 or just get a different phone…

I like this guy's no-nonsense advice and style. I haven't tried it yet, so I don't know if he's full of it, but he sounds like a guy whose advice can be trusted. I'm so sick of the way my 3G performs that doing this may save me from throwing the damn thing, with all my might, at the closest concrete wall - probably when I'm standing some early morning at the entrance to the gym and my KeyRing app won't come up that contains my membership card on it.

Could not find 3.1.3 or recboot as an application download

Another thing you can do to speed up your 3Gs (and possibly other iPhones/iPods) is to go into the SPOTLIGHT settings (in the General settings) and uncheck anything you don't really need to search. This sped mine (and others') back up dramatically, and I can still use iOS 5.x.

I would love to do this but this will render a lot of apps useless. That is the real problem.

@srisaas, if you want to use newer apps then you should get a new phone, if you can't afford that and want your older apps, like google maps, to work once again, then downgrade your ios.

I have an iPhone 4S now as I update every year, but my iPhone 3G is destroyed. It was "washed" by a 4 year old under running tap water. lol

dieburnbot-have you tried the 'drying out' process? ie Shake as much water out of the phone as you can, then, bury the phone in a large amount of dry rice (the domestic stuff that you eat) fill up a pot and push the phone right under the rice. Leave in a warm place for a few days, then try phone again. Has been known to work.

Turning off spotlight search works :). I am using iOS 6

You’re definitely not using iOS 6 on an iPhone 3G :) but I’m glad it provides a speedup for your on your newer phone.