As someone who grew up in a relatively rural place in the 90s, my family’s NES (the original Nintendo) became a big part of my life. I had a limited set of games at my disposal, but they were quirky, strange, often questionably designed worlds that I’d explore and re-explore in depth. A lot of this was pre-internet access, so I jumped into them with zero context or via the hyper-local gaming community of me and my older brother—and eventually other friends IRL.

Sometimes we’d borrow a game from someone and ravenously consume it knowing we had limited time before having to give it back. One such game—which I had forgotten the name of until now—was ShadowGate.

While I couldn’t remember the name, I could remember how wildly difficult it was, how much brute force had to be applied in problem-solving situations, how helpful it was to get tips from other cursed souls who attempted the game (drop the orb in the shark infested waters to freeze it over?!), and how easy it was to die. The death scene that really captured my imagination after all these years was:

You woke the sleeping guard from his beauty sleep.

He decides to eat you for breakfast!

Every time Claire or I accidentally rouse our new puppy from a snooze (where he inevitably starts creating a racket), I chuckle and think of this death, which I managed to repeatedly trigger in the game. 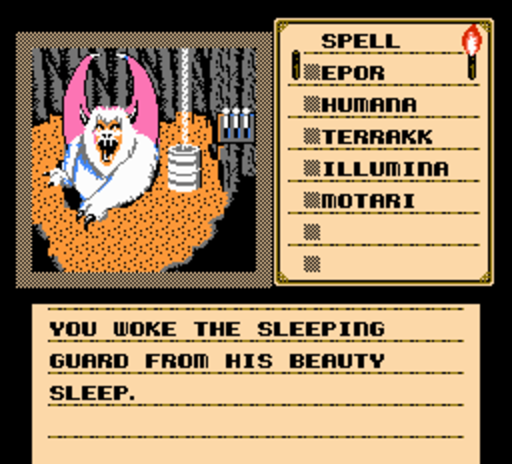 To read more about this cult point-and-click adventure game, see this FlyingOmelette review of the game.